The Stony Rises Project brought together ten contemporary artists and designers in an investigation of the rich, layered histories of the Western District of Victoria, in an exhibition developed by RMIT Design Research Institute which toured regional Victoria in 2010-2011, managed by National Exhibitions Touring Support (NETS) Victoria.

Following a four-day artists’ camp in April 2009, works were made in response to the area to the southeast, south and southwest of Lake Corangamite distinguished by the basalt rocks erupting from the landscape forming Stony Rises, as well as volcanic cones and crater lakes. Designers, artists, curators and community members were able to interact with and learn from each other in order to create informed works. The resulting exhibition focuses on the histories of the area, the intricate relationships of people with place, foreigners on new lands, and colonial and Indigenous narratives.

A fully illustrated publication Designing Place. An Archeology of the Western District has been produced, with essays by project curators Lisa Byrne, Professor Harriet Edquist, Associate Professor Laurene Vaughan and other scholars to accompany the exhibition. This publication and exhibition have facilitated a unique collaboration and intersection of creative practices – the artist, the designer, the architect, the landscape architect, the historian, the geologist, and the landscape archeologist. 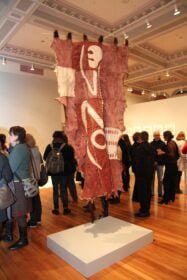 Vicki Couzens (Warrnambool VIC) Couzens explored the issue of conflict on the ‘frontier’ between her People and the invading Europeans. From this Couzens created a series of ‘honour rolls’ to acknowledge those Old People who fought and died defending their Country and the survivors of battles and massacres. In addition Couzens built a series of three metre high white wooden crosses which were placed in the landscape and photographed.

On the crosses were the names of the people and tribes ‘killed by whites’. This was in response to a site out side Port Fairy where a small white cross with the words ‘George Whatmore, speared by blacks 1841’ still stands. The theme of battles and massacres gives rise to exploring and understanding grief, loss, mourning and burial/funeral practices. Couzens also created a possum skin cloak, which is a traditional burial practice amongst her People.

Lesley Duxbury (Melbourne VIC) made work that connects vastness with the microscopic, past with present, similarities and differences through photography and text. The work included quotations about the weather conditions at the time of writing of Niel Black’s “Strangers in a Foreign Land”, also considering present-day weather forecasts. Duxbury produced large-scale photographs in combination with printmaking (screenprinting or relief printing).

Ruth Johnstone (Melbourne VIC) celebrated the enduring engineered structures of dry stone walls of the Western Districts of Victoria. Using the colourful and evocative walling language of hearting, coping and consumption, Johnstone developed a sculptural work that incorporated batter boards (timber construction framing devices for stone walls) to house aspects of the geological and human habitation history of the region.

Details of her familial generational history ensuing from forced Irish famine migration in the 19th century to the Stony Rises were presented against a deeper backdrop of indigenous ownership and geological activity. The ephemera of familial history are framed against the tempo of deep time. The work was constructed from timber, paper, string, found objects and electronics.

Gini Lee (Brisbane QLD) exhibited three works as a floor work assemblage, including found objects, photographic prints and digital projection. The intention was to create an archive of photographic and material artefacts gathered from both the Stony Rises and the arid landscape of the Oratunga pastoral lease in the Flinders Ranges in South Australia, where Lee often works. The work in this exhibition commented upon global concerns with universal mapping technologies, intending to know and or/intervene juxtaposed with personal touring agendas arising from moving through timeworn and hand made local landscapes.

Jenny Lowe (Melbourne VIC) exhibited five ‘time-line’ paintings (inks and rubdowns on polypropylene), an ‘architectural project’ inkjet print, and three scultptural models made from local volcanic rock, acrylic, and laser cut metal. Lowe has studied the geological survey maps of the Stony Rises, in order to understand a time-line of the geo-morphological and human effected change on this particular land surface.

The five ‘paintings’ work with materials in a similar way that materials and human acts effect change in the Stony Rises. The ‘architectural project’ addresses the quarries of the area, by anticipating an affirmative architectural proposal for new ‘Homes-teads’ that might inhabit the dis-used quarry sites, proposing a different response to that of the original Homesteads with their foregrounding of European landscaping.

Marion Manifold (Camperdown VIC) Manifold’s art deals with colonial landscapes and the history of the Manifold family – an early pioneering family of the Stony Rises. Her linocuts ‘Rosy dreams from the verandah of Purrumbete’ and ‘Spring – Purrumbete from across the lake’ reinterpret Eugene Von Guerard’s 1800’s paintings of these same views. Her art also adds decorative idioms from objects in the Manifold homesteads linking the work to her personal history. For this project Manifold reinterpreted the Purrumbete homestead’s Walter Withers murals in linocuts, and created 6 prints approx 80 x 120 cm.

Laurene Vaughan (Melbourne VIC) focussed on the drystone walls that cross, mark, hold and define places across this particular region and provide a link to the South West regions of the U.K. and Ireland from where they originate. Typically these walls separate and mark boundaries of ownership and use. Vaughan explored the walls from an alternate perspective and considered them as holders and containers rather than as dividers: holders of meaning, place, memories and tradition. Within the work she is interested in the way that these walls, are both markers of land use and ownership, and are also the artifacts of generations of craft and skill passed through families.

Vaughan’s work is a translucent wall that explored the idea of containment, heritage, craft and place, through the elements of image, form and embellishment. Made from net-like cloth, the wall becomes a container of historic narratives of travel, place, displacement and the skill of the hand. Vaughan’s work explored the contrasts between the ephemeral with solid, and explicitly feminine in aesthetic.

Carmel Wallace (Portland VIC) worked with disintegrating walls; rebuilding lost sections with rocks treated in some way such as contrasting coloured paint (temporary) or earth pigments. This process was a tribute to the original wallers, and also a conceptual recognition of the negative side of the history of these walls, what they represent in terms of the displacement of indigenous peoples and the environmental impact of transplanting European farming methods to this area. Repaired sections symbolised the wounds of our heritage – ones that are in the process of healing. The creation of this work was documented and presented alongside related drawings, 3D works, and photographs.

Kit Wise (Melbourne VIC) developed a large format ‘mash-up’ composite digital image, drawing upon photographs taken by the artist, found tourist imagery of the region and historic images such as the paintings of Eugene von Guerard; as well as the Picturesque Atlas 1886 – Victoria, in which the Western Districts feature prominently. The atlas features thousands of hand engraved reproductions of people, places and scenes in Victoria at the end of its first fifty years of settlement. The resulting work was a wall mounted lightbox with composite digital image, approximately 1.5 x 2.0m.