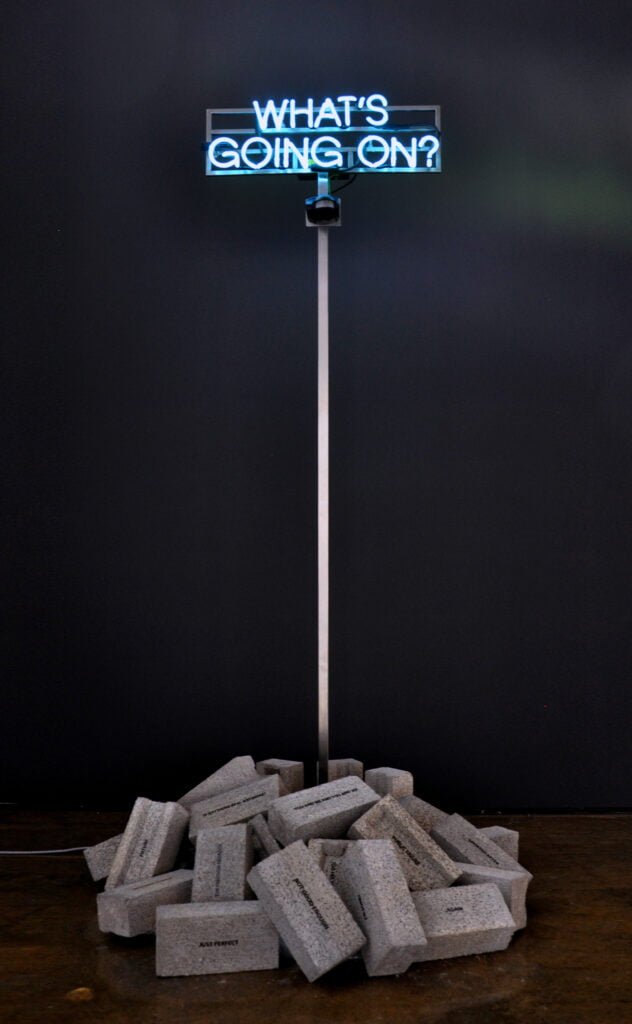 The works in ‘Synthetica’ continue my investigation into art and identity in the age of hypercapitalism. ‘Thought Piece (What’s Going On?)’ is part of an installation series which explores the notion of identity as commodity. The work transposes digital subject matter into physical objects to highlight the tangible economic value placed on our thoughts and desires. ‘Thought Piece’ appropriates language from the seemingly innocuous status prompts of applications such as Facebook; the viewer encounters a mass of concrete paving stones, inscribed with my thoughts, both public and private.

‘Divine Intervention’ proposes that the media and digital age have created a perpetual desiring machine, resulting in a global culture obsessed with material consumption. As corporations expand their markets into remote corners of the globe, the environment becomes subject to commodification. Natural habitats are destroyed in order to make way for newer, better environments—seemingly an improvement on that provided by nature.

Kristin McIver’s practice includes sculpture, painting and installation. Utilising devices such as text and neon, McIver’s works explore the themes of desire and aspiration prevalent in our hyperconsumer culture.

McIver’s studies include a Master of Visual Art at the Victorian College of the Arts and a Bachelor of Arts (Graphic Design) at Monash University. McIver’s work has been a finalist in a number of awards, including the Melbourne Sculpture Prize (winner); Keith & Elisabeth Murdoch Travelling Fellowship, Melbourne; Montalto Sculpture Prize, 2009/2010; City of Whyalla Art Prize, Substation Contemporary Art Award, 2011; and 3rd Ward’s Summer Open Call, New York, 2010. Her work is
held in public and private collections in Australia, Singapore, USA and the UK.