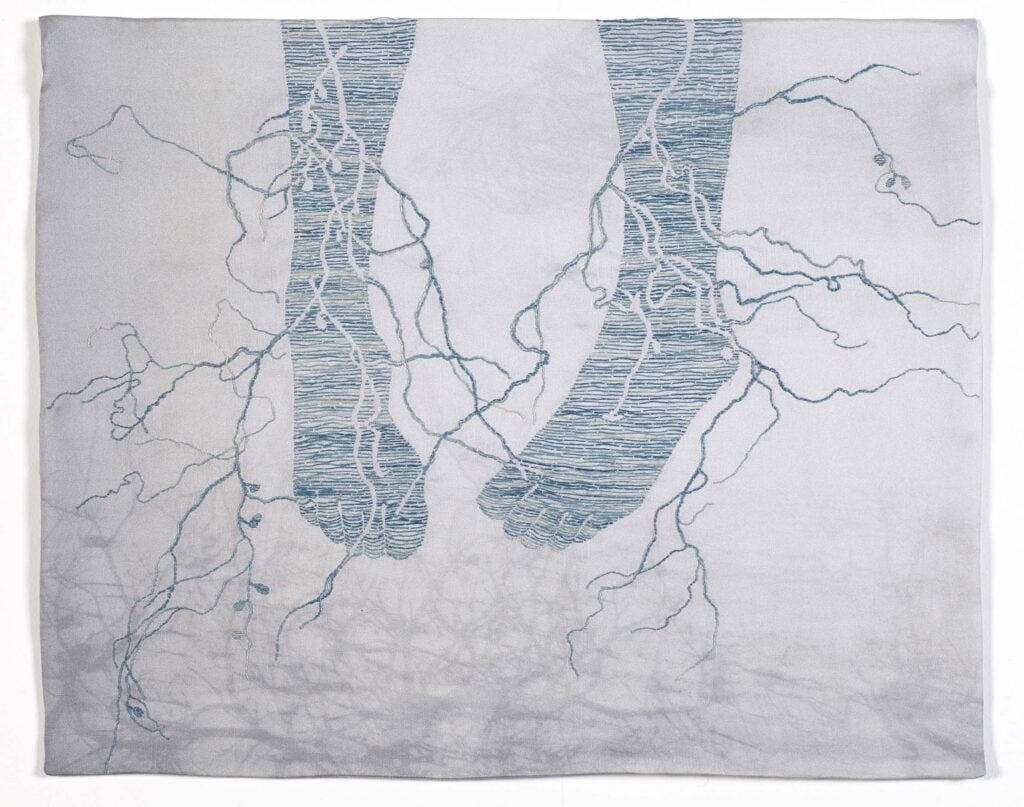 Ilka White’s practice spans projects in textiles, drawing, sculpture and installation, video, art-in-community and cross disciplinary collaboration. Direct engagement with the natural world (and the forces at work therein) is central to Ilka’s making process. Her current work explores relationships between the mind, body, time and place, and questions the separation of these elements. Ilka holds a Bachelor of Fine Arts from Monash University and an Associate Diploma from Melbourne Institute of Textiles (now RMIT). She taught in the areas of textiles and design at RMIT University from 1999 to 2011. She has exhibited internationally and her work is represented in the National Gallery of Australia, National Gallery of Victoria and RMIT University collections. Ilka has recently completed work for Group Exchange: 2nd Tamworth Triennial in collaboration with a photographer, philosopher, jeweler, printer, embroiderers and others.

Discovery Bay. The sound of the sea – low roar and the swelling, foaming ‘shhh’ of the water coming in and receding. The colours of old glass bottles – palest aqua, frosted, sage greys and slatey turquoise green. White wet foam and weed and luminous lilac grey sky. Living sand. Little penguin dead on the tide line, crumpet holes in the shell grit. Strings of long grape necklaces and ‘by the wind sailors’ in their thousands stranded in lines way above the waterline – blue rims and transparent sails. Etched cuttlefish and old rope. The under-shell of a female swimmer crab. Gull tracks doubling back and over one another – covering the entire area between clumps of rusty, leathery weed...

What life is this? As homage to these mysteries, my response grows at the rate of coral.

An expansive encounter with the mystery of the natural world, Ilka White’s way of being in the landscape allows for different kinds of knowledge and understandings. A blend of poetry and document, her sculptural works move us beyond the distant, observing eye to convey a sense of presence and immersion. Correspondences and rhythms inherent in the gathered organic materials and natural surrounds are echoed in the stitching and basketry techniques used to construct these works. With a gentle eloquence White creates a place where the unknown and familiar converge.

You initiated the Great South West Walk Art Project with Carmel Wallace. Why was it important for you to instigate this project and undertake this journey?

The year before the Walk, I travelled to Central Australia with another group of artists to produce work about Newhaven station, Birds Australia’s new desert reserve. The experience had quite a profound impact on me and on my work. I was interested too in the variety of approaches each artist took in their response to the place, and I spoke about it on a visit to Portland shortly afterwards.

When Carmel [Wallace] mentioned the fact that the spirit of the desert has often been discussed, while that of the coast overlooked, (though it is also strong) I agreed. I was also interested to see how the process of walking this country over an extended period of time might make me feel, and how it might affect my work.

Did you have any preconceived ideas or plans for your work before embarking on the Walk? Not really. I guess I wanted to let the experience shape the work rather than vice versa. I did presume that I would make some work with Nicky, but I expected it to be different to any of our past work.

What is it about the Great South West Walk that inspired you?

Oh, lots of things. I had to ask at one point what the plural of epiphany was! I remember watching the wind move the dunes by Swan Lake after the storm, in the late afternoon. My head lifted and dropped back, taking in the horizon in front and behind in one movement. My chest felt ripped apart by the sky’s eloquence. Times like these, the mind extends way out beyond the skull. Analysis dissolves. There is a mutual exchange between the body and the brilliant world – all around and in and through.

How would you describe your artistic practice from concept to making?

Sometimes it’s hard to pinpoint where the process of making a work actually began. It’s usually with the ‘essence’ of the thing that provoked me (the ‘thing’ being a feeling, a day, a quality of light or piece of seaweed or whatever).

I work in different ways for different projects and I usually have a number of works on the go at once, swapping and changing a lot. Some pieces take a few hours to make; others take weeks or months. The same goes for ideas. Some spend years in gestation and others are immediate. Usually though, I have future work sitting in the back of my mind for some time while I’m working on current projects, and it’s part of the process to have it brew there. It’s like a maturing time. You have mentioned that you and Nicky Hepburn intended to collaborate on works for Walk. How would you describe your collaborative process?

Even prior to the Walk project, we had collaborated on pieces made in response to the strange beauty of tidal flotsam and jetsam. We often find ourselves drawn to similar forms and textures.

In the past we have started work with a show and tell. Bringing treasures to one another, we have worked from the found object to speak together about the aspects of it that are important to us. What the Walk offered our process was a chance to discuss possibilities together right there on the beach, at the source of the work. It also broadened our starting point to include the mood and atmosphere of the place, and the experience itself, the feelings associated with being there. Because we know our materials well, we had historically tended to stick to our own mediums. I would work in textile and Nicky in metal. Since the Walk we have both been more involved with each other’s material processes – working together in the studio making components in both materials. This is most evident in the Weather Vanes work, the design of which has been truly collaborative. Both of us have worked up the metal stems, both wound the feathers and both arranged and installed the components. The work has morphed and evolved between us – its authorship is indistinguishable.

What did you hope to capture in your work? I wanted to communicate something of that feeling of expansion and connection that time spent in the natural world elicits – some of the awe and of that expansive mystery that has both humility and grandeur in it. As an example, I wanted Casting to be ambiguous, to carry a sense of both plant and animal. It is like a record of a creature’s movement – through sand, through space. It also ponders the forces and stresses that direct a plant’s growth; I was wondering what makes it, or us, or any living thing, go this way and not that way?

What were the major challenges you faced on the Walk?

Initially I found it hard to drop my concerns about the running of the project; outstanding organisational things, the mix of very different artists, how everyone else was feeling etc. I sometimes craved a bit more solitude, and some places were really hard to walk away from. I wanted to stay put in one spot more than once. I also faced fears about doing justice to the place and the experience. Sometimes you want to say to people ‘just go down there’. It’s a stunning part of the World. I take a while to settle on what I want the work to say, and then there is always the chance it might fail.

What do you hope the viewer will take away from your work and the exhibition?

A feeling of wonder about the world. Some sense of the rhythms of the place the works came from. A desire to get out into their country; to really look and feel and listen to it. A reminder of how precious the land is.