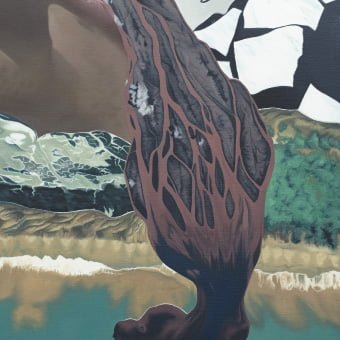 I create paintings that depict impossible spaces where surface and depth, representation and abstraction and naturalism and artifice, converge. My paintings are based on collages using found images of natural and geological formations, vegetation, rocks and landscapes. The assembled imagery bypasses narrative in order to concentrate on the surfaces of the paper objects that are depicted, and the formal elements of the painting itself. This creates a compelling encounter between the physical depth of the images that have been represented and the abrupt white edges that hint at their origin as printed pieces of paper. The natural elements are not presented as pristine objects, but are instead cut, reassembled and carefully reconfigured to mimic the format of a landscape, exposing an unsettling hybrid which locates itself in the psychological rather than the physical and reflects upon the contested distinction between what is natural and what is real. This is suggestive of a secluded and sensual space where distance is concealed and danger lurks. Alice Wormald

Wormald has received awards including the Fiona Myer Award, the Casama Group Award and the National Gallery of Victoria Women’s Association Award. She has been a finalist in awards such as The Geelong Contemporary Art Prize, 2014; John Leslie Art Prize, 2014, 2012; and the Banyule Award for Works on Paper, 2013. Her work is held in collections including the Fiona Myer Collection, the Joyce Nissan Collection and private collections in Australia and internationally. Alice Wormald is represented by Daine Singer, Melbourne.