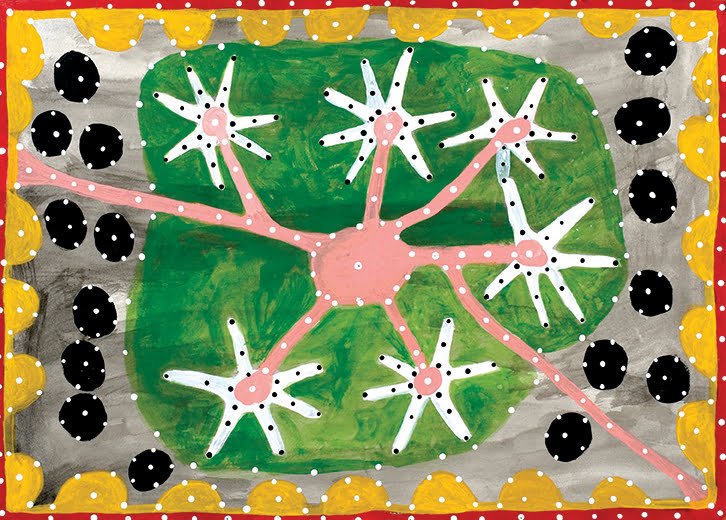 The world is not a foreign land

The world is not a foreign land
An Ian Potter Museum of Art and NETS Victoria touring exhibition, curated by Quentin Sprague

Indigenous works from three geographically and culturally distinct regions, the Tiwi Islands, the Kimberley and North-Eastern Arnhem Land, are featured in The world is not a foreign land, an Ian Potter Museum of Art and NETS Victoria touring exhibition.

The world is not a foreign land, curated by guest curator, Quentin Sprague, presents works by Timothy Cook, Djambawa Marawili, Nyapanyapa Yunupingu, Ngarra, Rusty Peters and Freda Warlapinni, which reveal a series of productive and meaningful relationships. Sprague, who travelled widely while researching the exhibition, says, “This exhibition brings together a group of artists whose work highlights new ways of thinking in-between the different regions, cultural groups or art histories within which each artist lives and works. “In this sense, it’s about highlighting new relationships—whether formal, material, or poetic— which activate areas of overlap, resonance and even contradiction.”

These artists employ a number of approaches that illuminate the diversity of recent and current practice. This is evident, for example, in the small-scale fibre-tipped pen drawings from 1998 by the late Andayin artist Ngarra. These intricately detailed works – never exhibited before – depict grand ancestral narratives at a disarmingly intimate scale and provide a striking counterpoint to the large-scale paintings by Gija artist Rusty Peters, who is also from the Kimberley region.

Likewise, audiences will have the opportunity to consider the different approaches to bark painting and ancestral meaning through the work of Yolngu artists Nyapanyapa Yunupingu and Djambawa Marawilli from North East Arnhem Land, or the possibilities of intergenerational influence evident in the work of Tiwi artists Timothy Cook and Freda Warlapinni.

The exhibition catalogue includes commissioned essays by Indigenous curator Stephen Gilchrist, and Ian McLean, Research Professor of Contemporary Art at the University of Wollongong, NSW. Their thought provoking contributions encourage audiences to rethink prevailing ideas about Indigenous art and its circulation within the broader discourses of contemporary art.

The world is not a foreign land will tour to five venues around Australia from 2014 – 2016.

This project has been assisted by the Australian Government’s Visions of Australia program.