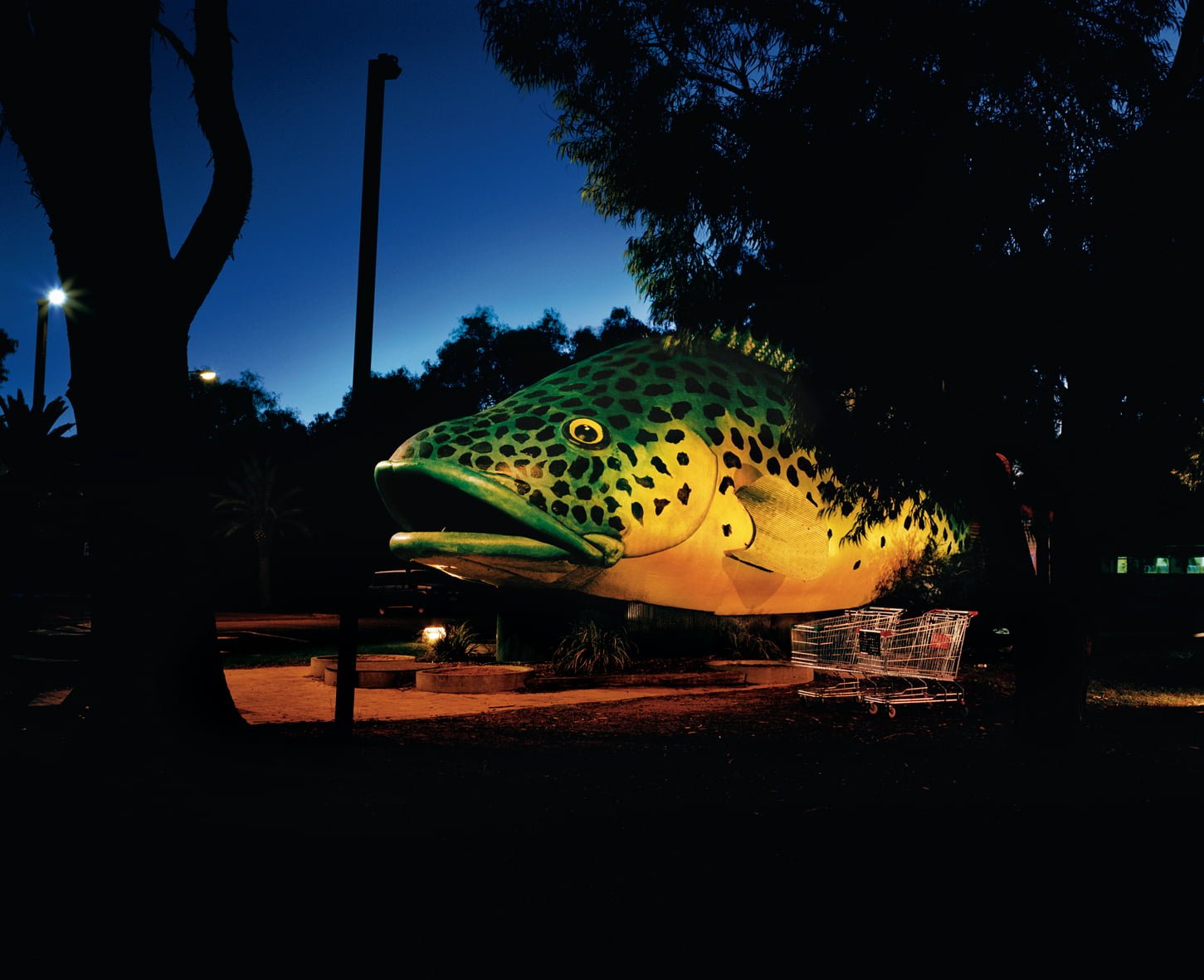 Murray Cod: the biggest fish in the river

Murray Cod: the biggest fish in the river showcased a rich array of visual art inspired by Australia’s most iconic fish. A fabled fish, the Murray cod has a special place in the nation’s imagination with its mouth that is as big as any storyteller and its tail that is as long as any yarn.

Consisting over 40 works of art by 27 artists, this timely and unique touring exhibition examined a great fish that symbolised the Murray River itself. Works by colonial artist Ludwig Becker, through to narratives about the fish by Ian Abdulla and a contemporary view of the river by Narelle Autio, the exhibition explored the cultural and historical significance of the Murray cod through images drawn from memory, spiritual association and acute observation.

The exhibition is divided into four parts, delving into the diverse visual representations of the Murray cod along with the cultural, historical and social background behind the imagery.

The first section comprises images of the Murray cod as it was revealed to science through precise and detailed anatomical drawings. The second part, selected from a number of public and private collections, consists of historic photographs of the cod which give profound insight into the cultural and social importance of fishing for Murray cod. The third section features contemporary paintings, drawings, weavings, prints, carved and painted emu eggs and a sculpture of the Murray cod. Predominantly created by indigenous Australian artists, each picture tells a different story – about the creation of the River; catching cod to earn a living; and the story of how cod spawn. Finally, a photographic commission by documentary photographer Narelle Autio forms the last section of the exhibition which showcases, in a highly personal manner, the river, the people and the cod living in a symbiotic relationship.

and collaborative works by:

What are some of your favourite works in the exhibition, Murray Cod: the biggest fish in the river?

I think it’s a really even exhibition. Part of its strength is that the works are complementary though I suppose there are some pieces that have particular meaning for me.

The ‘hero’ image is the hand-coloured lithograph by Ludwig Becker. It’s quite exquisite. You can see his hand on the lithograph and it’s very different to the editioned works, which were created by finished artists and which are much broader. The Becker proof captures the tiny little flecks of a mature Murray cod.

Becker has always been an important artist, he was the artist that got me into Australian history and art history. On the Burke and Wills expedition in particular, he produced some of the most signifi cant images from the exploration of arid Australia. Discovering Becker’s work in the [Museum Victoria] archive was central to getting momentum behind the exhibition. Becker’s image of the Murray cod stands for those notions of taxonomy that people understand inherently – you know, creating the really accurate shape of the fi sh or any animal, using accurate observation and control of line and texture to make the animal real. As you’ve mentioned, finding the Ludwig Becker images were very much the catalyst for the exhibition. How did you discover these works?

I was the producer of the displays to celebrate the Museum’s [Museum Victoria] 150th birthday and I was very interested in works commissioned by Frederick McCoy, the fi rst Museum director. I knew there were run-ons of the original lithograph prints that would be much easier to display than the images in big clumsy books. So I asked the Museum Librarian, Frank Job, who brought two boxes of material down to my desk. One contained the lithographic run-ons and in the other box there were about 400 original watercolour drawings of Victorian fish including several by Ludwig Becker. Happily they had been preserved by benign neglect. I then won the Thomas Ramsay Science and Humanities Fellowship to document the collection and make a web site and the Murray Cod show was one of the lovely spin-offs from that research. The exhibition connects the historic work with contemporary concerns and artistic production

You have often said that Ludwig Becker is a hero of yours. Why?

I love his hand, he’s an inspired draftsman. As a young man he had a collection of Rembrandt etchings that he sold to come to Australia and Rembrandt’s animated quality of line certainly rubbed off on Becker. He’s a romantic character and shares a lot of my interests. Becker could never work out if he should be a scientist or an artist. It was legitimate for him to do that in the 19th century as an early naturalist. His lightness of touch is something that I enjoy too, as well as his tragic death.

What are some of your other favourite works in the exhibition?

Let’s go around the room. Most of the works by indigenous artists have particular personal significance. I’ve worked with Ian Abdulla, Kerry Giles, Yvonne Koolmatrie and Bluey Roberts at Tandanya [National Aboriginal Cultural Institute in Adelaide]. It was a very intensive little working group of artists and curators. Kerry was my cocurator at Tandanya, so we did heaps of shows together. We often sat with the artists and heard their stories. Our knowledge grew through that curatorial process; it resulted in a really fresh output of works.

It was the period 1989 to 1991, the time where indigenous artists got a real foothold in southern South Australia. Ngarrindgeri artists in particular and the Murray cod or pondi was really important to them. Pondi manifests in different ways in each of these artist’s works.

There are several important works in the show from that time. You know, there’s Ian Abdulla’s Finding frogs in the night to put on the cross line to catch a ponde or pilarkie over night, [1990]. It was his first big painting from his first solo exhibition and he was discovering exactly what the painting medium could do and how to use scale. So the painting has got all that excitement in it.

Can you describe the story or narrative in this work by Ian Abdulla?

It’s a memory from Ian’s adolescence when all the young men would go down to the river and they’d use torches – you can see them in the painting, sort of flashing up on those huge river red-gums – and they’d look behind the bark for frogs and catch frogs crawling up from the river up the tree. Then they’d get the frogs and use them as bait on a cross line. A cross line basically goes from one side of the river or creek to the other and it’s held down with bottles and there are up to a dozen baited hooks spread out along the line. So they’d get the frogs and put the hook behind the backbone of the frog and draw it through so the frog stayed alive on the line and was attractive to the fish. They were after two species there – pondi, which is the Murray cod and pilarkie, which is the golden perch.

What is it about Ian’s style that attracts you?

His work is about memory, so when he paints he really goes back to that memory. He’s not painting it as he sees it; he’s painting it as he experienced it. When he’s painting an owl, it’s as though he’s inside the owl – painting out. Not representational like a Becker image, but still fully animate. He gets inside the subject and inside the action. He has a believable quality so that he really brings the memory forward, people recognise it – especially people who grew up in the country. You know, they’ve done all of those things. You are there, in the picture with him.

The other appealing side of this painting is the vernacular quality of the work. His speech is reflected in the words that he writes in the sky in the painting so you really feel his presence and his idiosyncrasy.

What about some of your other favourites?

Kerry’s [Giles] little painting of Pondi and Ngurunderi is really fantastic [Untitled (Nurunderi and Pondi), 1989], I think it is the best painting on the subject of the creation story of the lower Murray [River].

Can you explain the story?

That’s the Ngarrindgeri creation story that comes from when Ngurunderi, who is like a big culture hero for much of south-eastern Australia into Victoria. He saw Pondi first, down from the junction of the Murray and the Darling [River] and started to chase Pondi. Pondi took off in what was then a little creek, I think, how the story is told. And as Pondi tried to escape Ngurunderi he thrashed his tail and widened the river. If you go on the South Australian side of the [Murray] River you’ll see there are these huge billabongs and a meandering river that you can imagine having been created by this epic chase. Then down towards Murray Bridge, Ngurunderi throws another spear and the spear turns into Long Island that sits in the middle of the river. And eventually they got near Raukkan, on the bank of Lake Alexandrina – just before you get to the mouth of the Murray – and there Ngurunderi called out to Nepeli, his brother-in-law, to spear Pondi. Ngurunderi went over to Pondi and cut him up and as he threw back the pieces of the cod he named and created all those other species. As Ngurunderi threw the last piece he said, “You’ll go on being a pondi”.

What is it about Kerry’s style that attracts you?

Kerry was a really unique artist, she’s got this directness and an absolute emotional honesty that comes through her work that was reflected in her character too. I think she really captures that moment in the late 1980s, a period where there was a real cultural revival in southern South Australia, and one of the pictures [in the show] was painted in 1988. In typical Kerry style it is called Cultural revival. She often tapped into the moment like that and I think had a really strong sense of using iconography from her cultural tradition that was made accessible at that moment through the emerging collaboration between indigenous artists and museums.

This exhibition is being toured by National Exhibition Touring Support Victoria on behalf of a partner organisation.