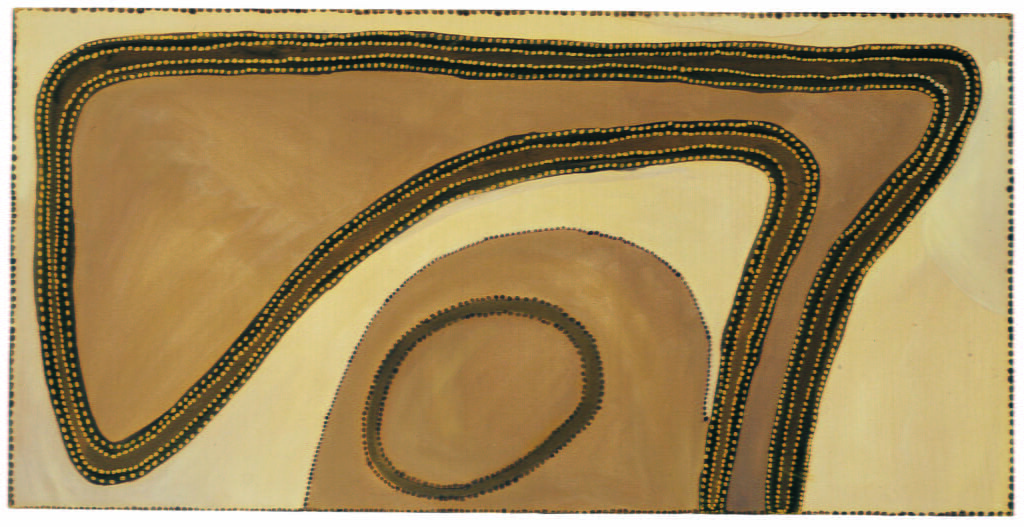 Rover Thomas (Joolama) was born c. 1926 at Well 33 (Gunawaggi) on the Canning Stock Route in Western Australia’s Great Sandy Desert. At the age of ten, after his mother’s death, Thomas moved to Billiluna Station in the Kimberley where he later began work as a stockman along the Canning Stock Route. It was here during the Second World War that he was initiated into traditional law.

Thomas worked with a European fencing contractor as far north as Wyndham and into the Northern Territory. After several years he returned to Western Australia and worked at a number of stations at Bow River, Texas Downs, old Lissadell and Mabel Downs. Early in 1975, he came to live with the Aboriginal community of Warmun at Turkey Creek and soon afterwards was given through a sequence of dreams the Kurirr Kurirr.

Rover Thomas achieved significant recognition as an East Kimberley artist both nationally and internationally for his restrained, sophisticated paintings that powerfully convey a deep affinity to the East Kimberley landscape. Rover Thomas and Adelaide artist Trevor Nickolls became the first Aboriginal Australian artists to exhibit at the Venice Biennale in 1990.

The first retrospective exhibition to honour Thomas’s life work Roads Cross: The Paintings of Rover Thomas was mounted by the National Gallery of Australia in 1994 and was followed by a touring exhibition Rover Thomas: I want to paint initiated by the Holmes à Court Gallery, Perth in 2003. The University of Western Australia awarded him an honorary doctorate in recognition of his artistic contribution in 1997.