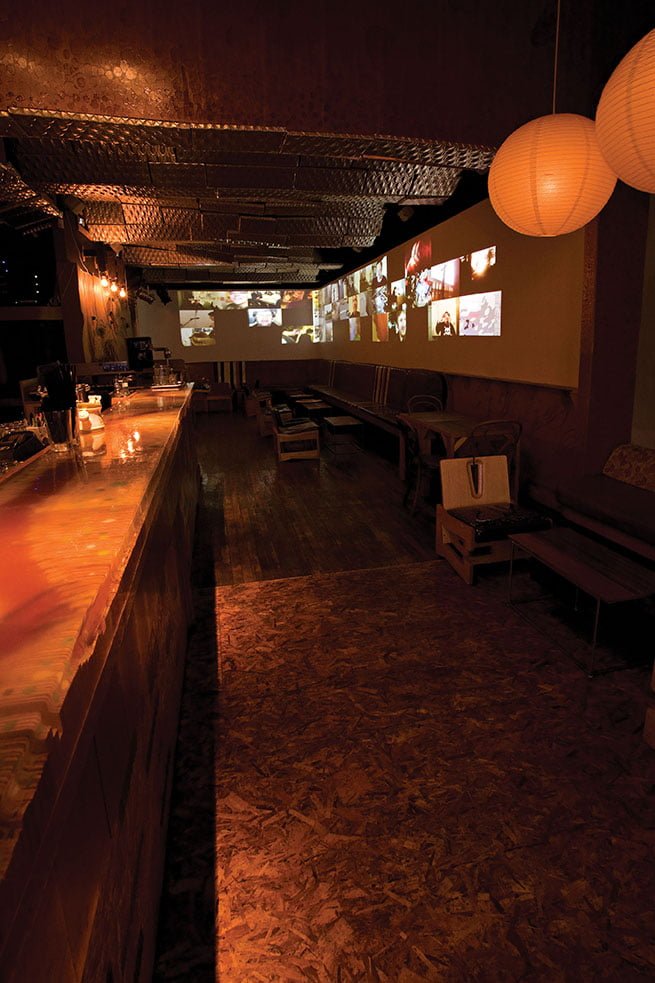 Pip Stafford is a multimedia artist whose practice includes video installation, performance, web projects, printed media and illustration. She is primarily interested in personal rituals, private lives and exploring notions of isolation and group communication. A graduate of the University of Tasmania, School of Art, she is currently a resident of the Rat Palace, an artist-run studio space in Hobart. She has shown work at Platform Artists Group (Melbourne) and Inflight Gallery (Hobart). In 2007, Stafford co-founded and organised the ONO Project, a collective using dis-used urban space for unique art events, with the support of Contemporary Art Services Tasmania. As well as her individual practice Stafford has collaborated with numerous artists and groups, organised art and music events and played in bands in both Hobart and Melbourne. In 2008 she was an artist-inresidence at CESTA in Tábor (Czech Republic). She is currently developing The Conversation Contraption micro-festival with The League of Imaginary Scientists (USA) at Casula Powerhouse Arts Centre (New South Wales) and Six_A Artist Run Initiative (Tasmania).

I Wish I Could Show You is an interactive multimedia installation featuring anonymous video messages. Stafford has invited the online audience of the World Wide Web to contribute anonymous content for her confessional website www.iwishicouldshowyou.com. These short videos, often shot on personal devices such as mobile phones or digital cameras, capture elements of real life that, for some reason, cannot be shared face-to-face between two people.

Hobart-based artist Pip Stafford is interviewed by Jason James, Coordinator of Hobart’s Peacock Theatre and one of the many contributors to Pip’s I Wish I Could Show You project.

Jason James: How did I Wish I Could Show You start?

Pip Stafford: I found out about the Next Wave Regional Kickstart grant and I’d already been thinking about mobile phone technology and how to incorporate that in my work. I’m interested in consumer technology and using it in a fine art context. I’m also interested in instructional art, which is basically getting other people to do your dirty work for you, such as with artists like Miranda July. So the idea came from all of those things, combined with the theme for the Festival, which was Closer Together. Through the Kickstart program the I Wish I Could Show You website was developed up to where it is now.

JJ: What was the response to your project?

PS: Initially the response was really good, people were excited about it. But the hardest thing was getting people to send me content [mobile phone videos] for the website, because most people don’t know how to use those functions on their phones. Originally I didn’t want it just to be people who knew about technology, people from Facebook or MySpace. I wanted it to be a whole community thing, where people would have the opportunity to submit.

JJ: I noticed that I was the first contributor, and I didn’t expect to be. But it’s easier now, my phone just has a ‘share to web’ button.

PS: It’s getting easier, but I think a lot of people are still scared of technology, particularly when it involves the Internet. People think if they put any information on the Internet then everyone will know about them and care about them.

PS: Well I do, I care about people a lot, on a really voyeuristic level. That’s what my artwork is, finding out about people and what they do when other people aren’t watching. I think that’s different to wanting to know about one specific person. I’m more interested in people on a group level and the things they do themselves, but also what they have in common with others.

JJ: [In the Next Wave Festival] you had your exhibition at the Horse Bazaar bar. How did you exhibit your work, which is primarily a website?

PS: It basically became a new work, apart from the website. I got all the videos that I’d been sent and put them into a software program, which was fed to five projectors around the bar. It created a grid of videos that was then looped.

JJ: Is that how you got away with the low-resolution source being blown up for projection, by keeping them small?

PS: Yes, they were quite small but they looked really good, they looked better quality on the projection than they do on the website.

JJ: So, do you consider yourself to be a regional artist?

PS: I do, but Hobart’s a funny place because it is considered regional but…

JJ: But the rest of Tasmania doesn’t perceive Hobart as regional. It’s only recently that there’s been recognition that Hobart is still regional.

PS: Yes. But I think the concept of being a regional artist has changed a lot. Particularly with the Internet and how easy it is to be in contact with people. Once upon a time it was probably really hard to get a show in Melbourne or Sydney if you were in Hobart but now there [are] blogs, websites and email. You can have a whole community of artists online, from all over the world. It’s not as isolated as it once was.

JJ: What is it like being an artist in Hobart?

PS: There is a good a community here, we’ve got some really good artist-run initiatives and collectives doing exciting work, and a lot of smaller galleries. Nearly every weekend there’s something happening so it’s exciting.

JJ: What projects have you done locally?

PS: One Night Only [ONO Project] was a project with artist Kate Kelly. We put on a show in an abandoned building in Hobart, with a number of artists from Hobart and Melbourne. We are hoping to do some more projects around Hobart, utilising dis-used spaces.

JJ: I heard it was a great success..?

PS: Yes it was, it was really well supported.

JJ: So you feel supported by your local community?

PS: Yes I do, but sometimes it’s difficult in Hobart because people are very conservative. If you want to do something it can often be met with resistance. We had some trouble when we did One Night Only, a few people weren’t keen on our ‘vandalism’ of the building as they called it. But we had permission from the owners and we didn’t damage the structure of the building in any way. For us it was a way to show that artists can work with building owners and with council and government bodies in a productive way.

Pip Stafford, 'I Wish I Could Show You' 2008, interactive multimedia installation, installation view at Horse Bazaar, as part of the 2008 Next Wave Festival, Photographer: Jeremy Dillon, Courtesy the artist and Next Wave