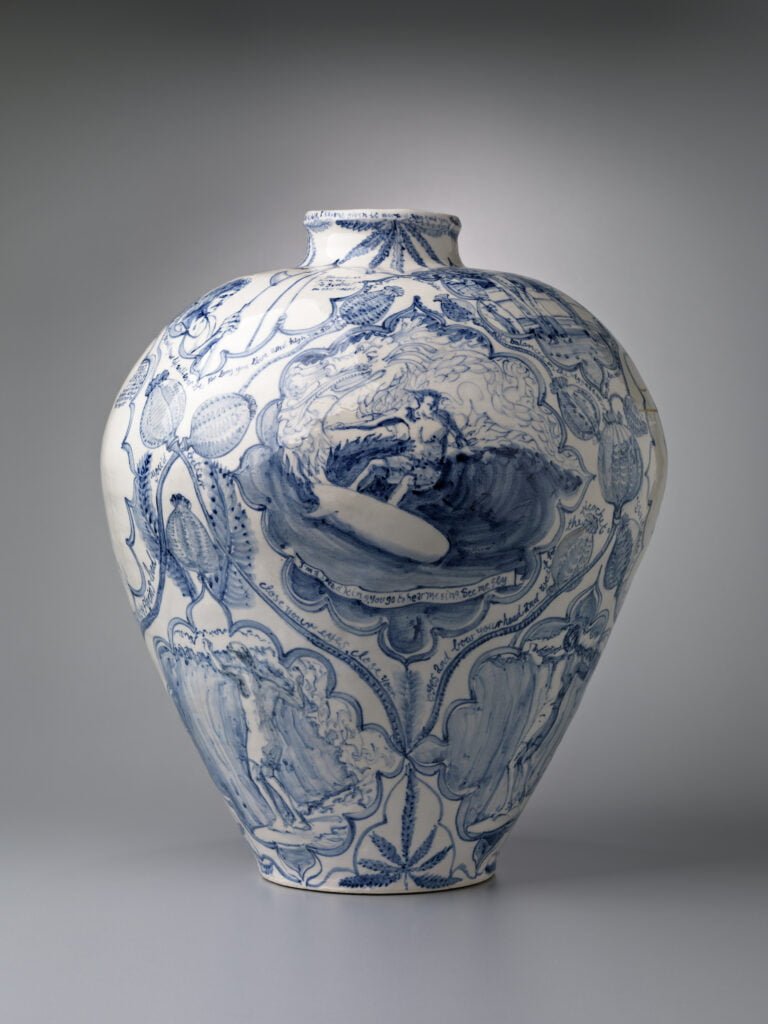 Gerry Wedd lives on the coast of South Australia's Fleurieu Peninsula and seaside themes are often found in his work. His many and eclectic occupations include being a designer for the surfwear company Mambo from the late 1980s until 2006.

From one perspective Arcadian still life can be viewed as a simple arrangement of functional ceramic forms. However, from the other side of the work, the vessels have been decorated to create a series of vignettes, all of which make reference to the coast and together form a landscape. Wedd describes these works as 'blue shadows' and his now signature use of cobalt blue underglaze links his work directly to the oriental willow pattern. Willow ware was enthusiastically copied in European ceramics from the eighteenth century onwards and artists such as Adelaide-born Mortimer Menpes, represented in the nearby showcase, were drawing on oriental influences in the late nineteenth century.

By incorporating nostalgic, personal and typically Australian references in his tableau, Wedd updates the willow pattern to comment on contemporary life and identity.

Gerry Wedd enjoys a national reputation in Australia for his handbuilt blue and white ceramics that brim with a dry wit oscillating from the humorous to darkly disturbing. Wedd’s introduction to ceramics was earlier than most, his mother being a committed hobbyist potter during his childhood. After finishing school, Wedd did not see himself as a potter and instead learnt jewellery making and went surfing. In the mid-1980s he was designing and creating ceramics, textiles, posters, clothing, metalwork and surfboards for Mambo, an irreverent, quirky and highly successful Australian beach culture label. This was after he decided to train formally in ceramics and in 1990 Wedd, with other ceramists, established the Jamboree Workshop in Adelaide. He now lives and works on the coast south of Adelaide.

For Wedd blue and white is epitomised by the famous and enduring willow pattern that has been mass-produced in Britain since the 1790s. First cobbled together by Thomas Turner of Caughley Works in 1779, it is believed that Josiah Spode popularised the willow pattern, which typically consists of pagodas, a weeping willow, crooked fence, fruiting tree, figures on a bridge, a boat and a pair of love birds. The inauthenticity of the willow pattern’s exotic world appealed to Wedd, who has set about updating the willow pattern in a series of work that bring contemporary Australian culture to bear on Asia.

For the work Arcadia, 2006, Wedd transformed the two-dimensional willow pattern into a three-dimensional tableau with the addition of new elements. Arcadia, zealously guarded, is a flawed ideological site from which an unfolding drama of rejection is played out by Wedd’s figurines in response to contemporary displays of xenophobia and racism in Australia.

Wedd’s other work, Thong cycle, 2006, consists of four ceramic patterned ‘thongs’, Australian slang for sandals, which are a ubiquitous part of our laidback outdoor lifestyle. Wedd’s painted scenes irreverently relocate the willow pattern from tableware to footwear, but the boat is now loaded with human cargo, the stacked houses are Australian and doubleness of meaning abounds, as art critic Anne Brennan put it in 1999. Poppies can equally symbolise drugs, Wedd drawing reference to Britain’s trade of opium to China in exchange for tea in the eighteenth century.

So with some trepidation, what do we make of the lone willow? A beautiful piece of design; a homage to the willow pattern; a symbol of Asia; a symbol of Australia’s relationship with Asia; a symbol of an unwanted ecological imposter? Just as the willow pattern was cobbled together from various patterns, Wedd’s narrative is suggestive, not prescriptive. Be prepared, however, for initial delight to be replaced by an unsettling feeling that you should have taken his work more seriously.