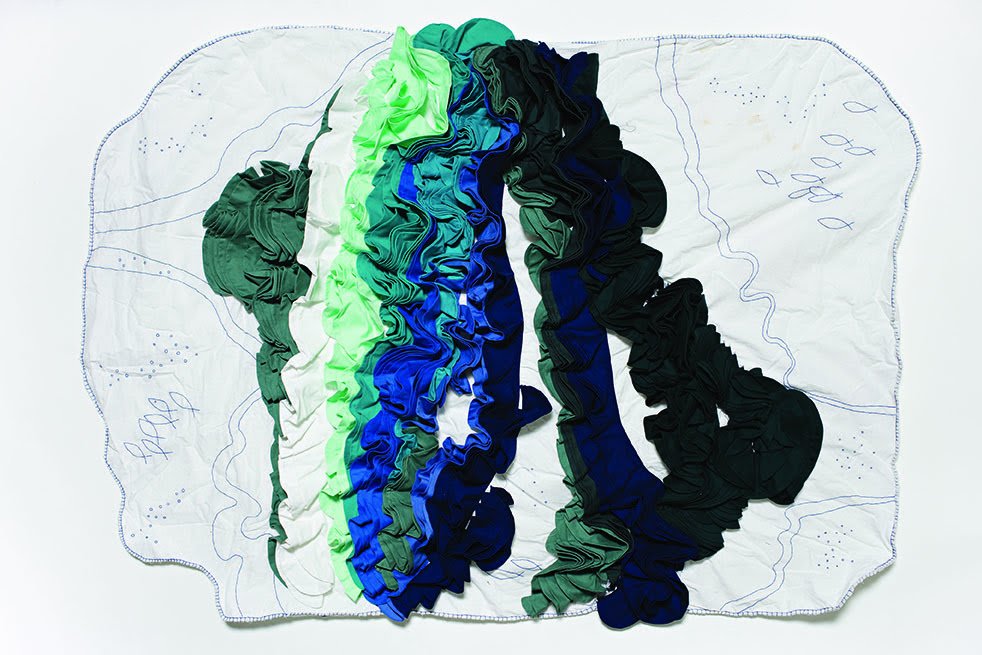 Bendigo artist Ellen Coyle has a background in theatre and costume arts, having received her Diploma of Arts (Small Companies and CommunityTheatre) in 2003. Since 2007 she has exhibited her costume and textile art in solo and group shows in Bendigo. Coyle explores the similarities and differences between people and their environment in terms of biological and sociological distinctions.

Whilst referencing craft traditions, Coyle uses her works to connect to her surrounding landscape in surprising ways. Her subtle performances, which slip under the radar of everyday life and human traffic, are gentle interventions that place her textiles, and ideas, quietly into the public realm. Having no control over who viewed her Foma 2 at Southbank, a busy inner Melbourne promenade, Coyle placed herself as a disguised performer - not a busker, nor an actor, nor a pedestrian taking in the city nightlife. Rather, a fibber, harmlessly revealing that all who pass by are also caught up, unknowingly, in the innocuous tales that keep life rolling forward.

In her textile work, Foma #2: The All Encompassing Comfort of Religion, Coyle has utilised such mathematical systems as the Fibonacci number sequence and the Golden Ratio to determine the order of the colour as well as the proportion of the ruffles.

Ellen Coyle is interviewed by her partner, James Martin.

James Martin: I was lucky to see your textile pieces during the Next Wave Festival. Could you tell me how you developed your project?

Ellen Coyle: I got into Next Wave’s Kickstart program and I had to respond to the theme of Closer Together. Originally I wanted to work with a friend who is a computer programmer in Bendigo, Fran Soddell. She had an exhibition at Allan’s Walk Artist Run [Space] that was based on computer modeling systems of fungus. I was talking with her and I thought it would be cool do something exploring those kind of similarities and commonalities.

JM: How does the Fibonacci system of numbers that you use in your project relate to the theme of Closer Together?

EC: It’s a number system that corresponds with a ratio called the ‘Divine Ratio’, which scientists use to work out all sorts of naturally occurring proportions. At the time I saw this number system as the thing that links us together even despite our apparent differences. But my project ended up being something completely different, it was called Foma, which is a made-up word in Kurt Vonnegut’s novel Cat’s Cradle and it means ‘harmless untruths’. The word is part of a religion in the book called Bokononism and it refers to the things that can be explained away under the guise of faith.

JM: I noticed that there are themes of religion in your pieces, but also one of the strong themes I observed about your Next Wave work is water.

EC: Well I wanted to create a seascape on the blanket. I used the Divine Ratio in some aspects of the blanket, with the ruffles and the numbering of the colours.

JM: You presented your pieces on Southbank in Melbourne. Was there an intended relationship between the Yarra River and that particular work?

EC: I never actually thought about it. I just wanted a public space, taking the pieces there and seeing how people responded to them.

JM: It was different in that way, because your work wasn’t there permanently?

EC: No, it was only there for two hours each night, for four nights, so it was something you would only see if you were walking past.

JM: Since the Next Wave Festival, how have you developed your artwork? I noticed on your blog site you had a ceremony where you put one of your dresses on a tree.

EC: Well, I have to admit that the Next Wave experience for me personally wasn’t always the best experience, because I wasn’t sure about my theme and I didn’t feel like I displayed my project in the best way. I had a bit of frustration so I got a costume that was in the Festival and…

EC: Yeah, released it. But other outcomes from the Festival have been that I’ve thought about what I want to do and taken steps to get towards it. My development outcome from my Kickstart workshop was to create a work that showed a performance using one of my costumes. From that, I figured out that performing in my costumes is what I want to do.

JM: Fantastic. So you feel that would bring your work to life?

EC: Yes. When I design costumes I tend to have a story or a character in mind. I create this crazy thing and get to be someone else, which is cool.

JM: How do you select your characters?

EC: It’s during the making of the costumes that the characters come to life. If I’ve got a theme, I just close my eyes and imagine what I’d be wearing, how I’d strut around and what it means to be in that costume.

JM: Do you find that the local community is supportive of your artwork?

EC: Yes, to the point that I wonder if I was a shit artist, I’m pretty sure they’d still support my efforts. Bendigo is a fairly big town but its arts community is small, yet at the same time it’s really supportive. All of this definitely wouldn’t have happened without Allan’s Walk, if I didn’t get on the committee there. Through them I’ve spoken to people at the Council and local organisations, everyone just seems to feed off each other constantly.

JM: So there’s a positive arts community in Bendigo?

EC: Yes, the arts community is really important because it’s big enough to do experimental things and they’ll usually understand it. Or if they don’t get it, they’ll at least appreciate it. I always wonder whether I’ve got more support in Bendigo because it’s smaller than Melbourne. You kind of get lost in Melbourne; it’s hard to find a niche. I feel like if you’re going to be an artist and be committed then you need to have some kind of community that surrounds you, a network of friends and peers.