Dr Deanne Gilson is a proud Wadawurrung emerging Elder and a multi-media visual artist. The Wadawurrung Creation Story is the beginning point for all of her cultural artworks. The Creation narrative extends to the elements of Earth, Air, Fire and Water as well as portraying the six Kulin seasons, the sky Country, and under Country. In her paintings, time is traversed through multiple layers of cultural memory, incorporating experiences from both before and after colonisation.

Gilson uses the process of artmaking as an extension of Ancestral ceremony, allowing her to draw on the notion of spiritual connections that cannot be seen but which are accepted as being held within the creation process. Her practice enables the memory of the spirit to be awakened through touch, sight, and the smell of Country. As she observes, ‘Country is alive and ever present within me and my work’.

The painted diptych Gilson has created for WILAM BIIK presents two
Knowledge Trees; the Manna Gum and the Banksia, sacred trees from
Wadawurrung Creation Stories. In the Manna Gum, the trunk has a scar
embedded within it from where wood has been taken to make a shield,
created for protection and hunting. Gilson is interested in the scar
itself as a metaphor for healing. Although the scar is still present
within the tree, it undergoes years of change and healing. Eventually
it rejuvenates and takes on new life, but never fully heals.

Surrounding the Knowledge Trees are stories of Wadawurrung histories
which depict narratives pre- and post-colonisation. From Ancestors
minding white children in the bush while the Eureka Stockade battle
raged, to the women carrying fire and performing ceremony along the
Yarrowee Creek (Yaramlok), to Ancestors being placed into stations
like Coranderrk. Also depicted is William Buckley, an escaped convict
who lived with Gilson’s Ancestors on Wadawurrung Country and whom
they believed was an Ancestral spirit due to his white skin. Shown here
dressed in a possum skin cloak, Buckley is being watched over by two
of the women who first discovered him, along with a trooper waiting to
catch him. As Gilson has said of the work: ‘Stories like these become
one over time, and the notion of Dreaming still continues despite
colonisation; past, present and future’. 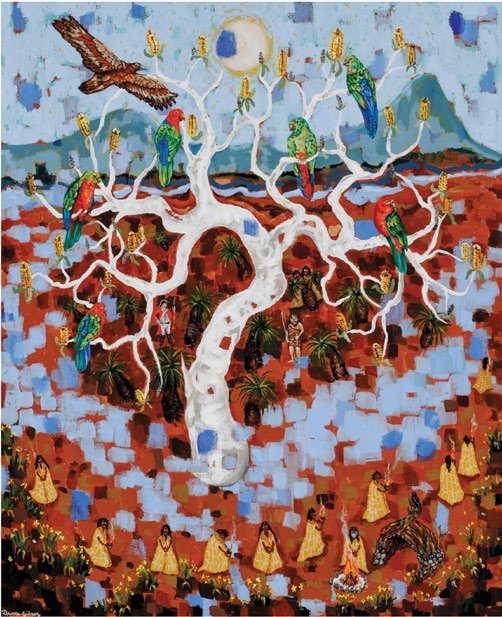 Deanne Gilson 'As I Walk on Country, Passing the Manna Gum and the Banksia Tree, I Remember the Past and Work Towards a Brighter Future' 2021 (detail of dipytych)