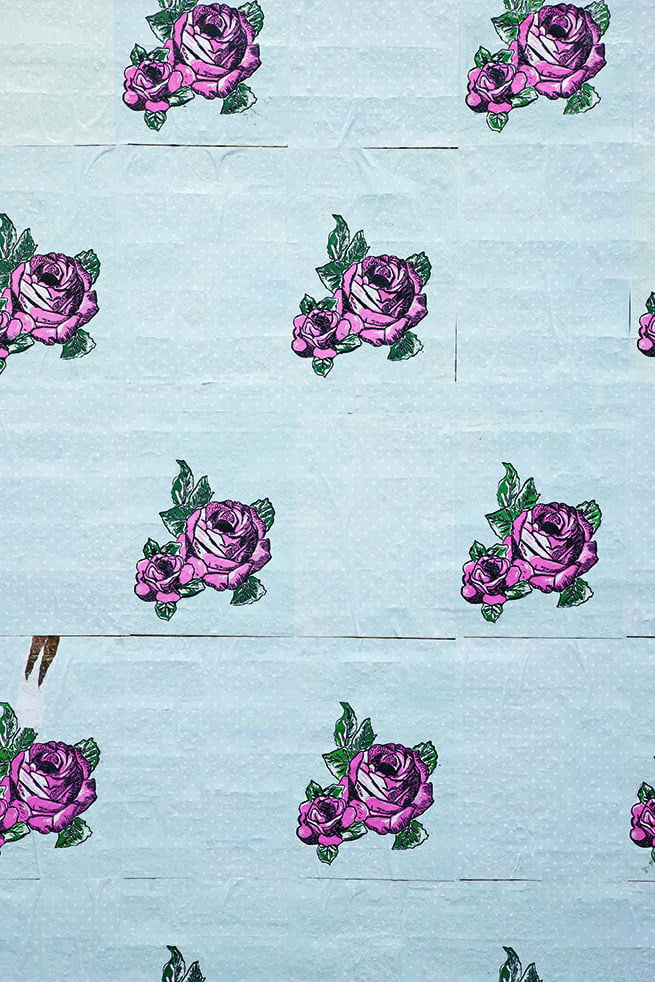 Ararat-based printmaker, Carly Preston recently received her Honours award in Visual Arts from La Trobe University in Bendigo after having previously completed a Diploma of Visual Arts at the Gordon Institute of TAFE in Geelong. Preston has also participated in a number of exhibitions including a solo exhibition at Allan’s Walk Artist Run Space in Bendigo. In 2007 she was awarded second prize at the Bendigo Works on Paper Prize at Bendigo Art Gallery. Preston has also investigated the ways in which rural women invite and include pattern and decoration into their domestic environment through working with the Country Women’s Association. Paper Wall explores the familial, in particular the decorative heirlooms that have adorned the houses of three generations of women. Blurring the division between art and interior decoration, Paper Wall is a motif from Preston’s grandmother’s crockery that gently repeats the print patterns of ancestral domesticity. Preston has reproduced the inscription on her grandmother’s plate in velvet flocking:

Carly Preston is interviewed by her mother, Maree Preston.

Maree Preston: Carly, what made you decide to work with the Country Women’s Association [CWA] branch of Ararat for this project?

Carly Preston: It came about because I wanted to explore how women in rural communities connect through art and craft, and the CWA gets together once a month to work on craft-based activities together.

MP: What was your project, and how easy was it to carry out when based in a rural area?

CP: The early stages were called Bring a Plate. I went to the CWA Ararat branch’s annual meeting and the women all brought along objects that contained patterns and designs. I worked with another regional artist [Leia Martin] who photographed the pieces for me, then I simplified the designs so they became more contemporary and more like repeated motifs. I exposed these onto silk screens, which was hard because I had to find materials and order supplies from Melbourne. I had to be resourceful; for example, I didn’t have a pressure washer so I had to use a carwash. I was relying on the local community to help out. I went to one of the CWA women’s craft days and screen printed tea towels with them, then I got you and Dad to help me print some more tea towels for an exhibition at the Ararat Gallery, [who] were so helpful and willing to help a young regionally-based artist. The local community was excited about the project and ready to accommodate someone who was willing to put back into the community.

MP: Can you explain the family component of the later stages of the project?

CP: The later stages were re-titled to Paper Wall and were a design of roses and dots from crockery that belonged to my grandmother and great-grandmother. I simplified it into a design that I liked, using colours from that kind of Wedgwood crockery. The personal aspect came because it was hard working with so many people and so many different organisations for the earlier work, so this was a way for me to tell more of a story.

MP: With the later stages of your project, what obstacles did you incur when printing the flower motif for the brick wall?

CP: These motifs were done using lino-cut, however it was hard to get access to a press. I ended up sourcing one in Geelong, so it was an hour drive every time I needed to print. Each print took at least half an hour as it had twenty pieces that had to be inked each time. That took a lot of time and effort, so that every plate would look the same when they were printed. Over a month I printed nearly 300 of these flower motifs.

MP: How did you adhere the paper to the brick wall?

CP: Originally I was going to use the glue that graffiti artists use but I discovered that it doesn’t actually come off. The brick wall was heritage listed and it had to be cleaned, so I ended up using a wall-paper paste. That took a bit of negotiating, as well as hiring a cherry picker because the wall was over two metres, and getting access to a permit. It was a lot of train rides into the city to negotiate things, so as a regionally-based artist it was hard.

MP: How was the artwork presented to the public?

CP: With the original wall that I’d chosen there was a lot of red tape involved and at the last minute it fell through, so one of the large churches in Melbourne lent us a wall at the back of their car park. The artwork was presented through Craft Victoria because the original wall was at the back of their building. They were great in that when the wall fell through they still stayed on board.

MP: What were the highlights or downsides of doing this project?

CP: One of the highlights was that the CWA ladies were so excited. At first they were very hesitant and didn’t understand the project but they were all pretty supportive. They came to the opening and we had an afternoon tea, and the title of the show was Bring a Plate. So it was pretty ironic and cute when some of the older ladies actually did bring plates of goodies and lamingtons for afternoon tea. My grandmother did too, so that made me think along the lines of doing the project on a personal note.

I think the distance from the metropolitan area had an impact because of the travel to get into the city for meetings, or to get to the places to print. Working with the CWA ladies was a nice change, but working in the city was also nice to have a peer audience for my artwork.